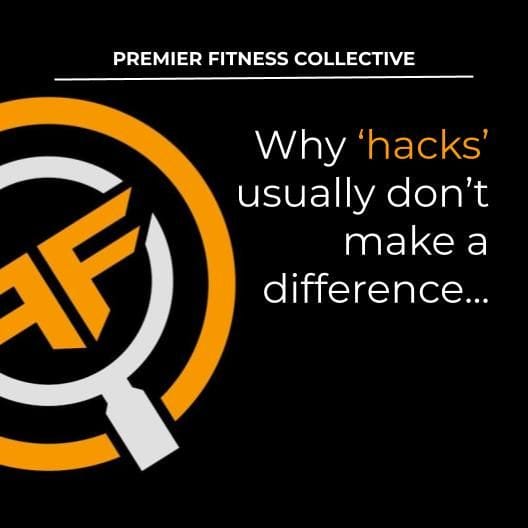 In case you've been living under a rock for the last few years, to 'hack' something probably generates images of a rakish tech-geek finding a clever shortcut into some sort of computer system to make it do what he wants. In that sense the new-age iteration of a hack is pretty similar, except people are now attempting to use new 'science' and technology to hack to improve some aspect of their bodies.
Now, I'm not going to outline the myriad of complex differences between a computer from the 80s and the modern human person, I wouldn't know where to begin. But one fundamental difference is that those attempting to hack human biology expect a 1-5% adjustment to fix 95% of their problems.

Moving your healthy snacks to the middle shelf at home won't make a difference if you eat out for most of your meals.

A glass of apple cider vinegar each morning won't negate those 3 glasses of Merlot the night before.

An Apple watch can't count your steps if there aren't any.

Nowadays people are so used to having instant access to whatever they want that their patience and understanding of hard work and delayed gratification has atrophied (or never developed). They are often so quick to outsource responsibility for their health and well-being to other people, apps, and brands instead of looking inward and addressing an attitude, behaviour, or mindset that usually needs to be adjusted.

The reality is that many of us live in relative abundance, where we want for nothing and our surrounding environment allows us to live well (whether we recognise and appreciate it or not).
We want our cake and to eat it too, but refuse to accept that our health and well being is the consequence of the total sum of our actions, not just those actions we want to acknowledge.

So there is definitely some merit to certain 'hacks', but unless you're already doing the important things really well, your time, money and effort would be better spent exploring the bigger components of your daily life.

Join The Team
FIND A TRAINER